As I mentioned on one of the previous posts that I had family staying over and  I was making a cake for my daughter’s birthday so, here’s what I ended up making. My daughter has had whey protein allergies since she was 4, she is now 14, it has been a challenge for her to enjoy somethings especially ice creams, cakes, and various baked goods. Every year I have to be creative with her birthday cake and this year we opted for something fun reminiscing of the cruise ship captain’s dinner where they usually serve a Baked Alaska. So the fun started with research since I kinda flopped with my son’s ice cream cake by selecting the wrong sponge for the cake and we needed a chain saw to cut through the cake, the flavors were good but it was just difficult to cut.  After looking at several recipes online I ended up using the Chiffon Cake recipe on King Arthur Flour’s website which turns to be spot on for my needs.

Below is a quick synopsis of the recipe adapted to my liking broken down into the 3 mixing steps (this usually works better for me when I need to move fast in the kitchen), for the exact recipe click on this link( King Arthur’s website).

You will need 2 mixing areas bowls or stand mixer and 1 additional bowl. I have 2 stand mixers so I used both and a medium glass bowl to hold the dry ingredients.

1 mixing bowl (or stand mixer) for the egg whites mix.

Beat the eggs whites with cream of tartar until foamy and then gradually add 1/2 cup of sugar and beat till glossy and set aside.

Mix the above 4 ingredients until pale in color – I leave it going on the stand mixer and then I mixed the following.

Mix the 4 ingredients above by hand.

And now it’s time for the fun…

Add the dry mix to the Egg yolk mixture and mix for 2-5 minutes making sure to scrape down the sides. Once mixed, you will fold in the glossy Egg whites mix until well-blended scraping down the sides.

I baked mine in 2 (9 inch round cake pans)  325° F for 45 minutes and used the toothpick test to make sure it was cooked through.

Once the cake was cooled I stored them in the fridge nicely wrapped with parchment paper and plastic wrap to use them the day of assembly which was 2 days later. 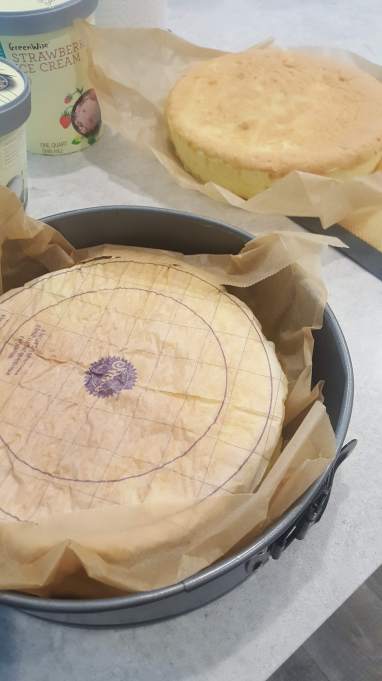 On assembly day I measured out the springform pan that I was planning to use as the mold and then sliced the 2 cakes in half horizontally leaving me with 4 pieces. I placed one round on the bottom of a parchment-lined springform pan, the other I cut it to lined the border of the pan. 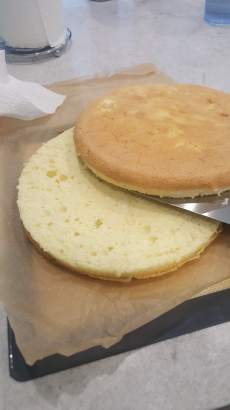 Once the pan is lined with the sponge it’s time to add the ice cream – the only ice cream I use is Publix Green Wise Ice Cream because it is made of whole milk (no – whey, low-fat milk or skim milk which is perfect for my daughter’s whey allergy problem and she can tolerate it). I began to add the ice cream however, I fudged it up – I added the ice cream in rows instead of horizontal layers, I realized that at 3am in the morning but anyways I could not reverse that. 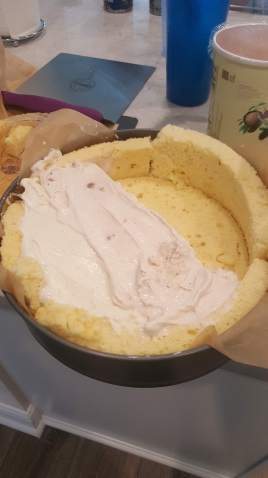 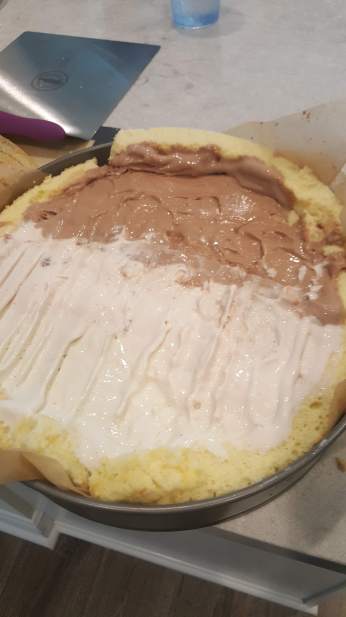 Once the ice cream is in use the remaining 2 pieces – place 1 round on top and use the other to cut up to cover the ice cream completely. Place in the freezer until you are ready to remove from the mold and cover with meringue. I used swiss meringue – simple recipe

I placed the above ingredients in a stand mixer bowl which I then placed the bowl inside a pot with water. I then brought the pot into a boil while softly beating the egg white mixture, lower the heat to a simmer and keep whisking just to incorporate and until the mixture reaches 175° f. When mixture reaches the temperature place the stand mixer bowl on the stand mixer beating until nice and thick, it will become very glossy with a marshmallow consistency.
Okay, now that we have that done when do I need to use this meringue you asked …I went nuts with this question because I was scared to assemble the cake with the meringue because I would have to store the entire cake in the freezer for 1 day and I was concerned about what would happen to the meringue so I stored the meringue in the fridge and the cake with the ice cream stayed in the freezer until birthday party day. I spread the meringue on the day of the birthday and left the cake in the fridge for 2 hours just before serving the cake I used a torch to toast the meringue.

You can see here what I mean about the ice cream being laid wrong but the cake was still awesome. The sponge was perfect- not too sweet, nice and airy and the meringue complemented the sponge.  This is definitely a keeper for a future birthday cake.

What I would have done differently…

of course, the ice cream to be spread in horizontal layers and most importantly I should have spread the meringue once the cake and ice cream were hardened and then on the day of the birthday all I had to do was to toast the meringue.

The meringue does hold in the freezer on the cake very nicely for several days without the meringue’s consistency being jeopardized.

The last thing is that once the meringue is on the cake it can stay in the fridge easily anywhere between 2-4 hours – it will not melt, the meringue does insulate the ice cream and keeps it from melting so quickly.